The Sound Bullet is a rechargeable pocket sized audio signal and wiring verification device designed to help your workflow. A quick, handy and powerful tool that can be used as a substitute for each element that handles audio, helping you locate any faults quickly and effectively.

The Sound Bullet should be used as a preventative tool for quick diagnosis and troubleshooting problems with complex audio setups. Check for any potential malfunctioning elements such as microphones, cables, connectors, processors or speakers with your Sound Bullet. It is conceived for applications ranging from live entertainment audio installation to studio recording, broadcast and television.

I really hope you enjoy using your Sound Bullet.
Thanks,

Sonnect Audio (division of TiEmme elettronica S.a.s.) guarantees the function of the Sound Bullet for a period of (2) two years from the date of purchase. If the product becomes defective, or malfunctions, within two years of purchase Sonnect Audio will either repair the product free of charge or replace it (pending inspection of goods and proof of purchase).

These guarantee provisions do not cover damage caused by accidents, transportation, incorrect use, carelessness, third party modifications, operation with non-specified outputs or inputs, Phantom Power voltages outwith DIN 45596 standards or charging adaptors non-compliant with USB power-supply standards. The warranty will become void by carrying out any repairs or services by third parties. The full Terms and Conditions contract can be found on the Sonnect website:

To obtain the benefit of this warranty, ship the complete product with proof of purchase to:

CE Compliance Statement
We, the manufacturer, do hereby declare that this device is compliant with the limits of the European Council Directive on the approximation of the laws of the member states relating to electromagnetic compatibility according to RL2004/108/EG and European Low Voltage Directive RL2006/95/EG.

According to the guideline RL2002/96/EG (WEEE – Directive on Waste Electrical and Electronic Equipment), valid for all European countries, this product has to be recycled at the end of its service life. In the event that the disposal of electronic waste is not possible, the recycling can also be done by TiEmme elettronica S.a.s. For this, the device has to be sent free to the door to:

When switched on, the Sound Bullet generates a pink noise signal, which is routed to the male XLR by default. A 1 kHz sine wave tone can also be selected by pressing the SEL button. Press the TO button to route the generator to the 1/4″ Jack and the internal speaker/Mini-Jack. The generator’s output can be adjusted to three levels: -10, -20 and -40 dBu.

When plugged into a balanced input of a sound console, the Sound Bullet checks for Phantom Power, which is individually metered on pins 2 and 3. Two dedicated LEDs will illuminate according to the DIN 45596 voltage standard (48V ±4V). In the event that the voltage detected is between 24V and 44V, the LEDs will flash slowly.

An XLR cable can be plugged into either end of the Sound Bullet in order to conduct a continuity test on the XLR pins 1, 2 and 3. To enter (and exit) this function, press and hold the SEL button for 2 seconds. To change the pin under test press the TO button.

* Do not use 48V Phantom Power on a 3.5mm Jack plugged into the Sound Bullet.

The Sound Bullet can test a multicore line system connected to the inputs of a sound console. Activating Phantom Power on the input channels desired to be checked will allow for a complete test of all three cores of the XLR line.

Simply switch on the Sound Bullet, which will start to generate pink noise, and plug it into the XLR line being tested. The operator at the sound desk will listen out for the pink noise, while the operator on the other end will check the 48V indication on the Sound Bullet (see table). This will determine if all pins of the XLR line are functional. 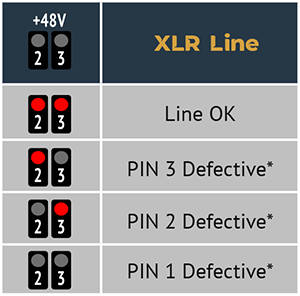 *Result independent of a signal being detected at the sound desk.

The Sound Bullet can produce an unbalanced signal, which is very useful for quickly testing one or multiple DI boxes connected to a mixing console.

The provided 1/4” Jack-Jack adaptor allows you to quickly plug the Sound Bullet straight into the input of a DI Box. 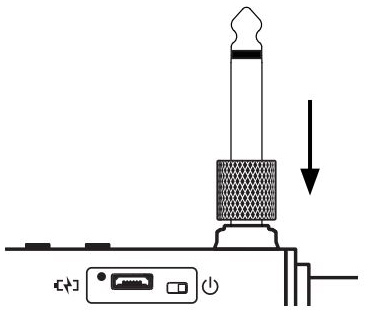 Simply switch on the Sound Bullet, which will start to generate pink noise, and adjust the output level. Direct the generator to the 1/4” Jack by pressing TO. As a confirmation, you’ll hear pink noise coming out of the speaker*, along with the function LED turning blue. With the Jack adaptor insterted, plug the Sound Bullet into the DI box and check for pink noise being received at the mixing console. 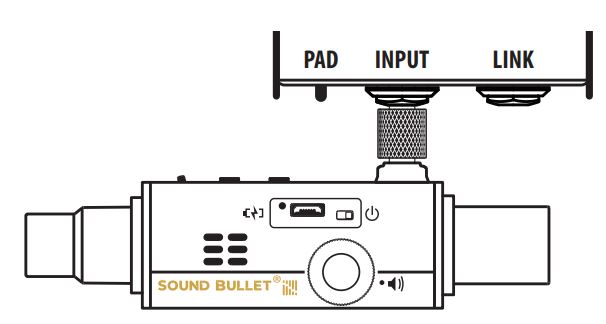 *Adjusting the volume knob down will not affect the output of the 1/4” Jack.

The Sound Bullet can be used as a quick diagnostic tool to troubleshoot FX pedalboards.

Press the TO button to switch between sending and receiving audio via the 1/4” Jack. This will allow you to quickly inject a signal into the input of an FX pedal or listen to its output.

This way you can quickly detect which pedal in the chain is faulty or where the signal path was wrongly configured. 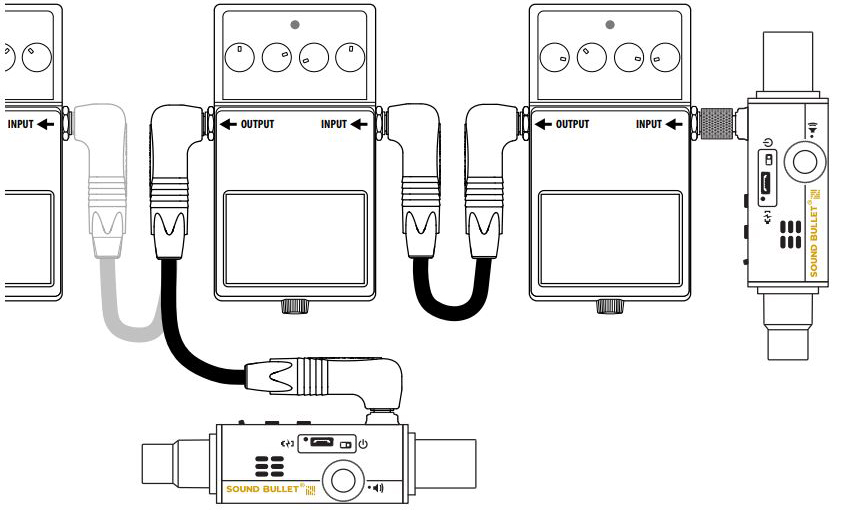 With your Sound Bullet it is possible to test a hardwired IEM line, or a recording feed coming from a sound console or outputs from any device, for example a loudspeaker system processor.

When the Sound Bullet is switched on, signals present on the female XLR or 1/4” Jack are reproduced by the internal speaker by default. Make sure the mixing desk is sending either pink noise, music or any other type of audio into the line you are testing and simply plug that line into the Sound Bullet.

The input meter on the Sound Bullet will give you a general indication of signal presence “SG” or a signal being very loud “PK”. This is useful in noisey environments or if you can’t get your ear close enough to the Sound Bullet’s speaker.

If you wish to gain a more accurate listen to the signal, plug your headphones into the Sound Bullet’s Mini-Jack output. Adjust the speaker or headphones output level by turning the volume knob on the side 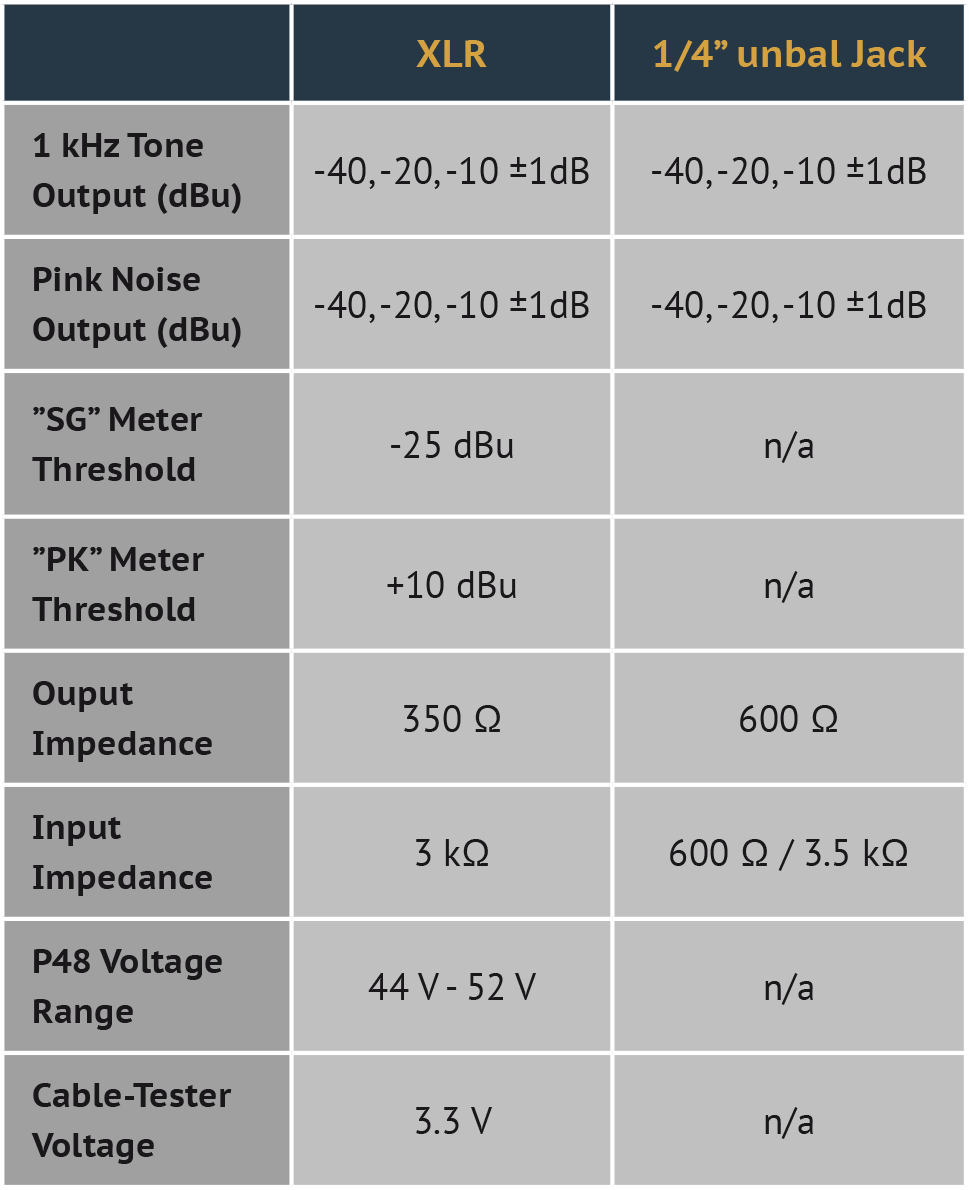 Did you know we have a UK Sonnect dealer? Please do have a look around our website, it’s pretty cool and the 360° Sound Bullet spinning around is class! When you’ve made your mind up, head over to Theatre Sound Supplies to place your order !